KARMIN: Innovative Surfaces for Patient Rooms of the Future

As an industrial partner of the KARMIN Project, Continental's contribution to the first patient room that is ideally hygienic to combat infections is the easy-to-clean and disinfectant-resistant skai® Palma NF upholstery.

Hospital infections and multi-resistant pathogens against which antibiotics are no longer effective are becoming an increasing problem in German hospitals. In multi-bedrooms, these pathogens can be rapidly transmitted and thus become an acute danger for patients. In the KARMIN project, the infection-preventive potential of patient rooms is being researched and implemented.

KARMIN (from the German abbreviations for: Hospital, architecture, microbiome and infection) is a sub-project of InfectControl 2020, a consortium of business and academic partners promoted by Germany's Federal Ministry of Education and Research. In addition to the Technical University of Braunschweig, the network partners include Charité Universitätsmedizin Berlin, the University Hospital Jena and Röhl GmbH Blechbearbeitung from Waldbüttelbrunn. In addition, 17 industrial partners support the project. One of them is Continental.

In a comprehensive study, the KARMIN project first took stock of and evaluated the bacterial colonization of patient rooms. This determined which bacteria live on the surfaces in patient rooms and how they behave and change. The result: Single rooms are ideal for minimizing the risk of infection. However, since the exclusive use of single rooms has several disadvantages and higher costs, KARMIN investigated whether it would be possible to build two-bed rooms in such a way that they would also be an alternative in terms of infection prevention.

Prototype of the Patient Room that Prevents Infections

Architects and designers at the Technical University of Braunschweig succeeded in designing a twin room that is safe against infections in collaboration with molecular biologists and physicians. This was implemented as a prototype together with Röhl acting as corporate partner. The prototype demonstrated that prudent spatial planning and reorganization of hygiene-relevant objects can prevent transmission of dangerous germs. Among other things, it was important for the planners to select materials and surfaces that could be easily cleaned and disinfected to ensure a high standard of hygiene.

The upholstery material chosen for the seating - two chairs and two benches - in the patient room of the future is skai® Palma NF, a material that meets the highest standards in terms of cleanability and disinfection resistance. This is the result of a specially developed test procedure with which employees of TU Braunschweig tested many different upholstery surfaces for their hygiene properties. The testers attested skai® Palma NF excellent cleanability and high resistance to disinfectants, decisive advantages in this special application. The surface is also particularly durable as a result. It is also flame-retardant and thus meets the B1 flame protection standard. Thus, patients and visitors sit both safely and comfortably. In the prototype of the first infection-preventive patient room, skai® Palma NF in the colour inka is used.

Demonstrator at the World Health Summit in Berlin

After the first prototype of the infection-preventive patient room was completed at the end of March on the premises of Röhl GmbH, a demonstrator will be built on the premises of the Charité Berlin until October. There it will be presented to an international audience during the World Health Summit from 25-27 October. The event, which has been held annually since 2009, will take place in 2020 under the patronage of German Chancellor Angela Merkel, French President Emmanuel Macron, European Commission President Ursula von der Leyen and WHO Director-General Tedros Adhanom Ghebreyesus. 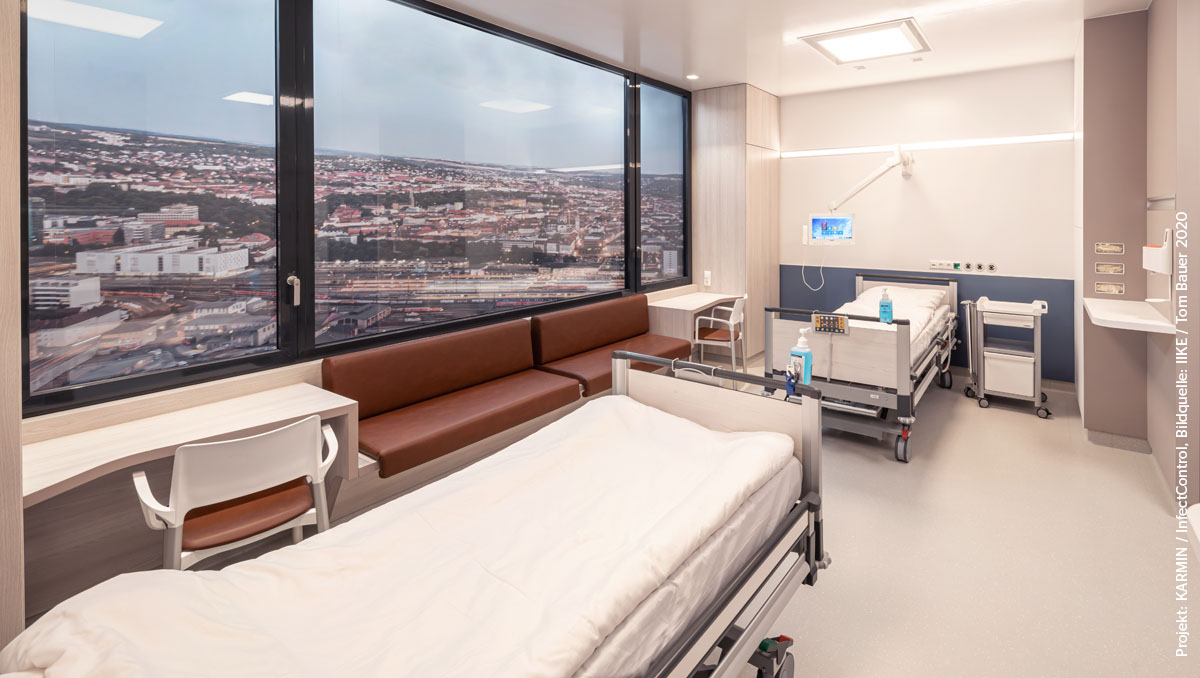